Also set-up some logic to check the space name against the current day of the week. If they don’t match up, it cycles through the list until it matches. This ensures it always grabs the correct url if that days space isn’t the most recent one checked/edited. Going to add this to the Shortcuts that add stuff to my journal spaces as well.

So I set-up another Siri Shortcut Automation to run at the beginning of every day, getting the link to the current day’s Kinopio Journal and posting here to my blog. Debating whether I keep these in the RSS feed or if I remove and set-up a separate RSS feed for just these links.

Has anyone kept up with The Problem with John Stewart? The initial reviews were pretty awful and I never got around to watching.

I’m actually really excited for the Hawkeye show. The Matt Fraction // David Aja run on the comic is one of my favorite things in comics ever.

Set this Shortcut up to run every four hours in the background. Going to add a few more RSS feeds, but will essentially capture all the things I save to Raindrop, Futureland, or others and add them to my daily Kinopio Journal. 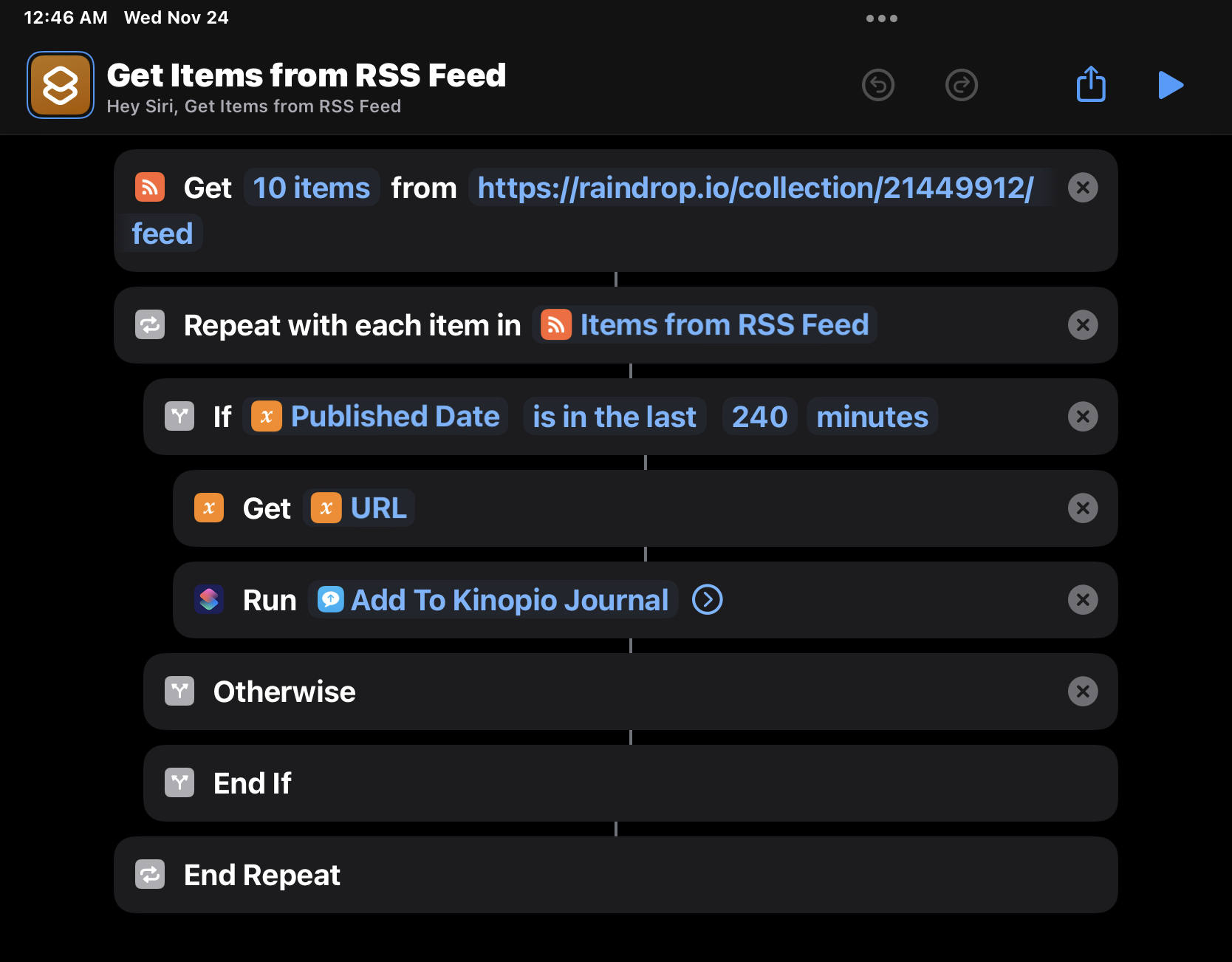 Microblog posts (like this) already flow to Kinopio through a Drafts action -> Siri Shortcut at the time of creation.

For things that can output RSS (Raindrop, Futureland, etc.), I’m thinking I can run a Siri Shortcut automation that kicks off a couple times a day and grabs the URLs for anything created in the previous time frame and sends it to the days Kinopio journal.

Been thinking a lot about my various places on the internet, what goes where, and how I can automate collecting everything into one place.

📌 Pop-Up Magazine via Why is this interesting? by Colin Nagy - this is really cool and something I hope to see in Seattle or Chicago some time soon.

Lakers would have a solid starting line up if Avery Bradley were truly the defender we thought he was when he was in Boston.

The Kenosha shit is complete bullshit. I don’t want to say the kids name, but Jesus; that’s how we are handling this? He murdered two people, plain and simple as that.

After seeing The French Dispatch, I want to get a tattoo that says “Les enfants sont grognons” in the script from the movie but I can’t find a screenshot of the wall that’s on.

Staying up late is detrimental to my wallet. Subscribed to Puck and Air Mail for no real good reason last night other than I was up late and bored. Don’t keep up with the subscriptions and newsletters I already have…

Very much in a sports mood with the NBA season starting and the Bulls off to a hot start so I went ahead and resubscribed to The Athletic and Cleaning the Glass.

What a comeback for the Bulls! Came back from 19, mostly all in the fourth quarter to win it. This team is just so much fun. Poor first half with way too many turnovers, but wonderful to see good minutes from DJJ and Ayo.

Bulls off to a fast start from three tonight in Boston.

Justin Fields makin’ moves. Starting to look a bit more comfortable and finding ways to make plays with his feet.

Still obsessed with sports on the west cost. Late night basketball games finish at a reasonable time and football starts at 10 (sometimes 8), which means a beer is acceptable before noon. Makes F1 and soccer a bit tougher though.

Things were going so great for the Bears, then the announcer had to go mention the 49ers haven’t scored a touchdown against the Bears in 14 quarters, since 2015, and then bam! Deebo goes for 70+ yards and a score (luckily the TD looks to be reversed, but it’s still 1st and goal).

🔗 Everybody, the Bulls are back, alright! | Noh’s Notebook

Must see TV. Time to go running with the Bulls.