Warning: I’m not great at distilling something like this over text.

With the news of 12 European football clubs coming out and talking about their potential Super League, I started to think about what UEFA could be doing to solve for the problems big clubs have, while keeping things fair, and meeting the needs of the fans.

This is what I came up with.

The quotas should be determined by real factors of how teams and leagues historically perform (and reviewed on a regular basis), but for this exercise I’m setting it at:

I think a more useful way to look at it, though, is how many teams in the UEFA Super League team get to stay after the first season.

So the teams in the “current season” of the Super League fight for these spots with the remaining teams being relegated back down. The winners of each of the five leagues (plus “Other”) get promoted to fill the quotas and the remaining two teams would come from a Champion’s League-like tournament. In this scenario Liverpool would have be among the top three EPL Super League teams in order to stay in the Super League and if Everton were to win the Premier League they would get promoted and replace the bottom English team. There is a scenario where the Premier League team has more than 4 teams in a given season though, if an EPL team were to win the qualifying tournament. In this scenario, we would still only keep the top three performing EPL teams and the remaining would be relegated in exchange for one promoted team. That last spot would then go to the winners from the qualifying tournament, which again, could still be an EPL team.

With this set-up you are not only competing against the Super League, but also against the teams from your country/segment. It might sound complicated at first, but I think it’s pretty simple once you wrap your head around it.

There are a few kinks that need to get worked out, like incentive for finishing high in the league, besides just beating the teams from your home league in order to avoid relegation. Also, there would have to be some sort of tournament for the “Other UEFA League’s” in order to determine the promoted team. This would be a simple tournament of all the league winner’s (outside of the big five). Since these teams could come from various leagues and a team could get relegated to a league that doesn’t promote a team, the balance of leagues would be something that would need to be worked out. The last thing to figure out is how the Champion’s League tournament would work. I think you’d still want Super League teams involved in some way. It could be a way for a team to prevent themselves from getting relegated if they perform poorly compared to their country teams, but it would also allow for teams who don’t win their leagues to get promoted, as well as teams from other smaller leagues across Europe who would otherwise be fighting for one promotion spot in the “Other UEFA League’s” bucket. If a team were to win the Champion’s League, but had already qualified, you would move down the list by teams who went farthest in the tournament and look at the various statistics that determine ties like goal differential, etc. So if the Finals had Liverpool vs Ajax, and Liverpool already qualified, Ajax would get one spot and then you’d look to the semi-finalists for the next team who had not yet qualified.

It’s a lot, I know, but I think I’ve thought through many of the potential permutations and this structure accounts for most of them.

Below is a quick diagram to display where the teams would come from as I think the visual helps grasp to concept. 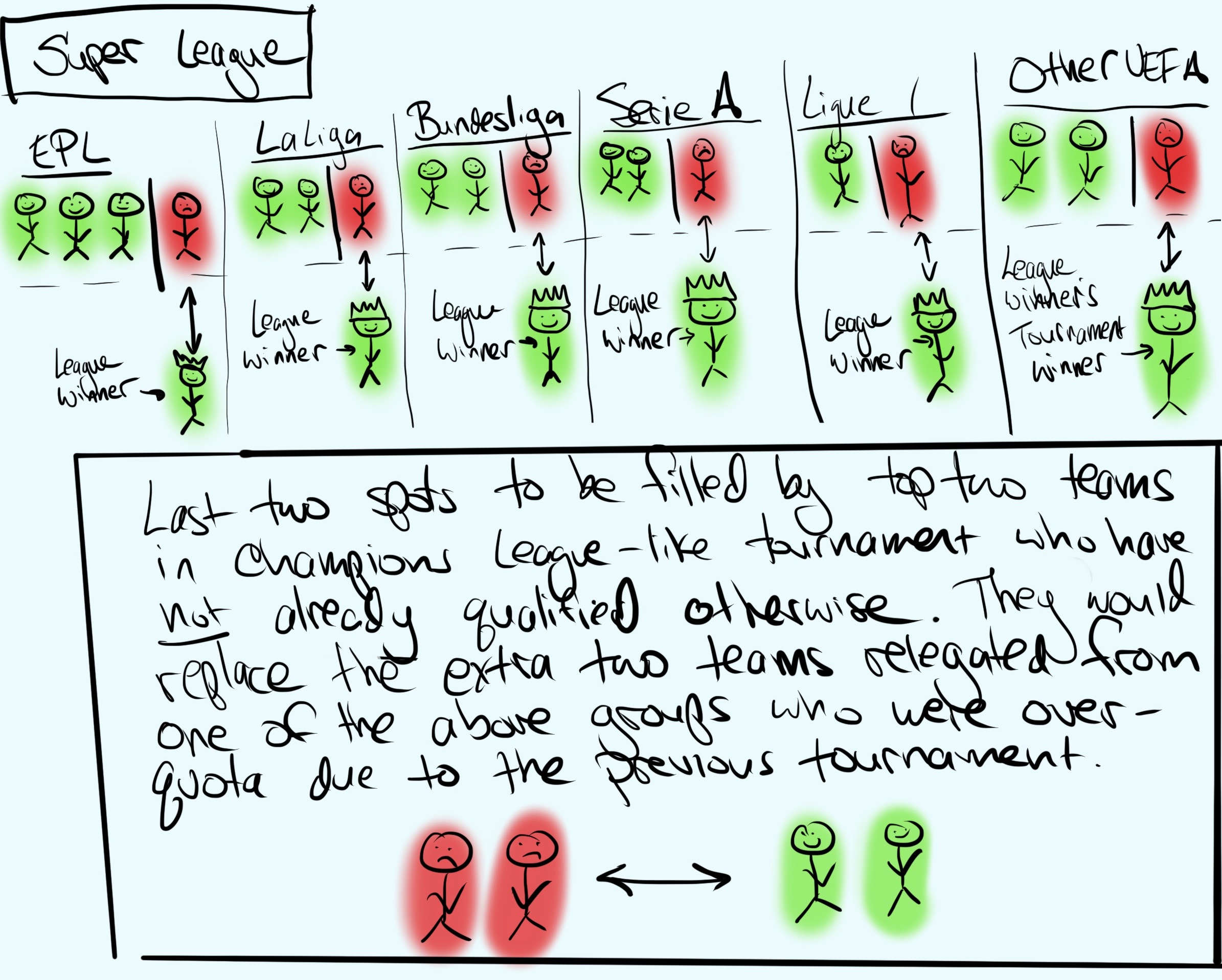